Peyton Junior-High and Senior-High schools are located on the same campus.  Our shared location allows for us to offer students the quality education appropriate to their learning level.  We are a four-day school with small class sizes.  Our highly-qualified staff enables us to offer dual-credit (college-credit) classes to students during their high school years.

Hello! My name is Shane Kelley.  I am super excited, honored, and blessed to be a member of the Panther Community.  I am originally from Granada/Lamar, Colorado.  My family has deep roots in public education:  My mom, who taught 2nd grade and ELL for Granada and Ft. Worth, Tx ISD (she was my 2nd grade teacher and taught for 33 years), my father Butch was a Vo-Ag/FFA teacher and later served as the GED coordinator for Bent County Corrections, Betty my stepmom, worked for the Lamar Public Schools for 20 years, and  my stepdad, Dennis, was a Middle School Woods/Trades teacher in Ft. Worth, Texas.

I grew up working on local ranches where I developed a strong work ethic and accountability.  I attended Panhandle State University in Goodwell, Oklahoma and the University of Northern Colorado in Greeley where I also played college football.  I moved to the Pikes Peak Region in 1997 for my first teaching/coaching job in Ellicott, Colorado.  Since then I have taught and coached in Ellicott, Peyton, Falcon, and Liberty High School in Colorado Springs, Colorado.  This year will be my 25th year in public education as a teacher, coach, and administrator.

Growing up in Southeast Colorado, I had the rare opportunity of getting involved in “living history” through my dad.  It led to being a part of a lot of commercials, movies, documentaries, Wild West shows, and historical reenactments.  Some of them include: Reenactment of Buffalo Bill Cody’s Wild West Show, The Medicine Tale Coulee Battle of the Little Bighorn Reenactment, Bent’s Fort Dragoon Army of the West encampment, History Channel documentary on the Sand Creek Massacre, Chesrown Chevrolet Posse and Emich Dodge Commercial Campaigns, Flying W Wranglers music video, TV mini-series Son of the Morning Star (1991),  Conagher (1991), Far and Away (1992), The Postman (1997), Ride with the Devil (1999), and many other Civil War/Indian War reenactments.

I live in the Peyton/Falcon area with my fiancé Carrie.  Between us, we have 6 children ranging in ages from 13 to 21.  We also live there with our dogs, a cat named Frying Pan, three goats, and six horses.

In my spare time I like to CPRA rodeo, compete at team roping jackpots, day help on local ranches, go boating out on Pueblo Reservoir, go to concerts, travel, and spend time with my family.

In partnership with our community, Peyton High School is committed to providing a creative, safe and supportive environment where students, staff and parents strive to provide opportunities to discover purpose, seek resources and create experiences for learning, personal growth and responsible citizenship. 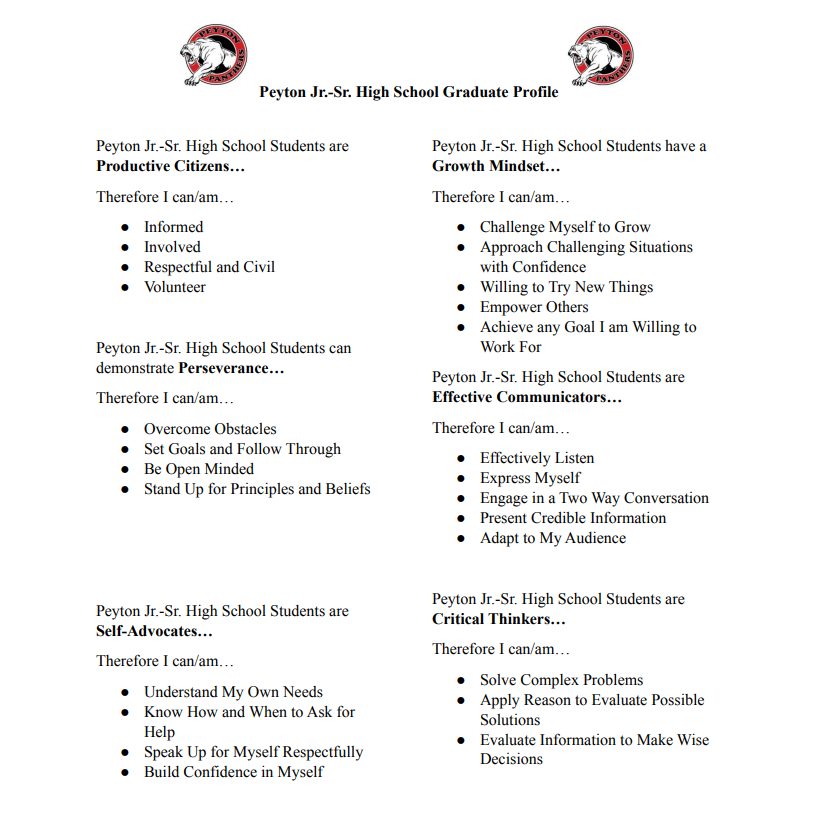 Peyton School District follows the guidelines established by the Colorado Department of Education.  The testing window for 2016-2017 is April 10-  April 28.  For more information about CMAS, PARCC, PSAT and SAT, visit the CDE Assessment page. 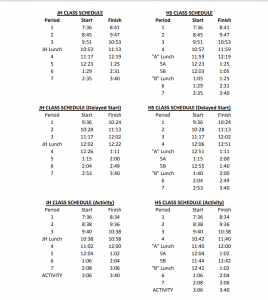 The Peyton School District is committed to academic excellence and strives to facilitate academic growth in all students.  Gifted students are not an exception.  Gifted Students need additional challenges, accelerated curricula and changes in learning environments to meet their diverse needs. Working in cooperation with the Pikes Peak BOCES and under the guidelines from the Colorado Department of Education, the Peyton School District has processes for referring, identifying and meeting the academic and emotional needs of gifted students.

The Foundation for Colorado Gifted and Talented

Cherylin Peniston Scholarships – These scholarships are intended to assist current Administrative Unit GT Directors/ Coordinators for the purpose of fostering exellence within gifted education and providing financial assistance in meeting the requirements for GT qualification.

How Sick Is Too Sick?

Evaluation of a sick child must consider which diseases are currently circulating among students, staff, and the community. Known exposure to cases or an outbreak of a contagious disease (including but not limited to those listed here), even without a confirmed diagnosis, may necessitate more stringent return to school requirements.
During Colorado’s ongoing response to the COVID-19 pandemic, children and staff who have symptoms consistent with COVID-19 should receive testing, and follow the COVID-19 isolation guidance until testing is completed or if they test positive. If the individual tests negative for COVID-19, the individual should then follow the recommendations for their disease or symptoms using the below guidance.
There are four main reasons to keep children and adults at home:
1. The child or staff is at risk of infecting others with COVID-19 or another contagious illness, either because of symptoms or recent close contact.
2. The child or staff member does not feel well enough to take part in usual activities. For example, a child is overly tired, fussy or will not stop crying.
3. A child needs more care than teachers and staff can give while still caring for the other children.
4. The child or staff member has symptoms or an illness is on this list, and staying home is required.

Illness Guidelines: When to Keep Your Child Home

Cold symptoms may include:

Guidelines on keeping your child healthy

You may obtain more detailed school illness guidelines and information at www.cdphe.state.co.us/dc/Epidemiology/manual/School_Guidelines.pdf

Thank you for helping us keep Peyton students and staff healthy!

Physician’s Authorization for Administration of Medication by School Personnel 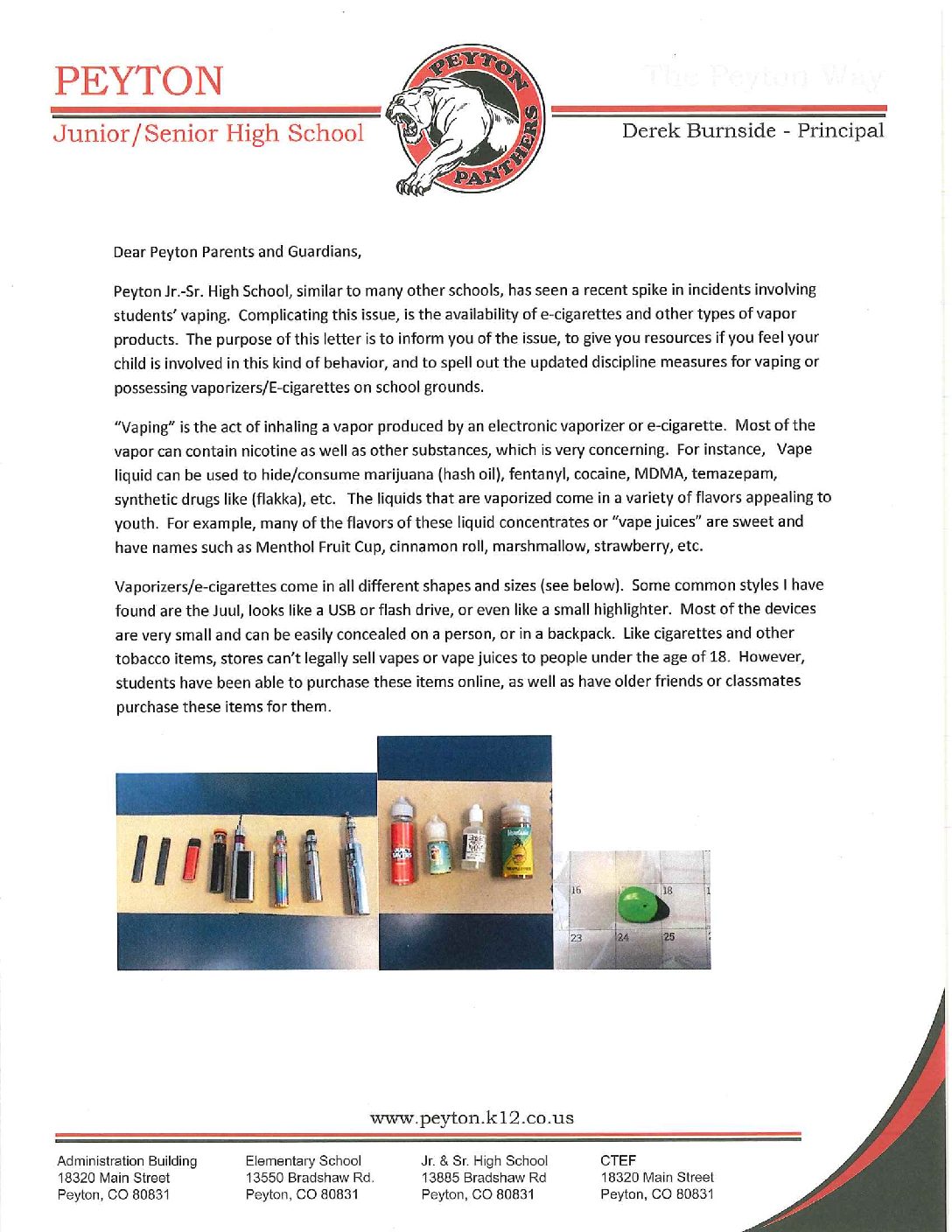 Notice of Lead in Drinking Water

Notice of Lead in Drinking Water

THINKING OF ENROLLING IN OUR DISTRICT?

Thank You To Our Sponsors