Matchwits is an academic team program offered at the Peyton Schools. At the Middle School level (6th – 8th grades), interested students come to a weekly after-school practice session in order to prepare for the meets.  To join, contact Ms. Esser.

At the High School level (Grades 9-12), Matchwits students practice weekly for monthly meets in the fall between October and February. The points for each match accumulate through the final meet.  At that time, the winners are awarded.  In addition, the Matchwits team competes in the district Knowledge Bowl tournament for a chance to compete at State Knowledge Bowl Competition held in April.

National Honor Society (NHS, grades 10-12) and National Junior Honor Society (NJHS, grades 7-9) are organizations designed to encourage the 5 tenants of Character, Citizenship, Scholarship, Leadership and Service. Students with a minimum cumulative GPA of 3.5 and 1 semester attendance at Peyton will receive an application in August and January. To achieve full membership status each student needs to complete the community service requirements: 25 hours for NHS and 15 hours for NJHS. Community service is not limited to NHS/NJHS activities. Pins and bars are awarded at the Academic Awards each spring. 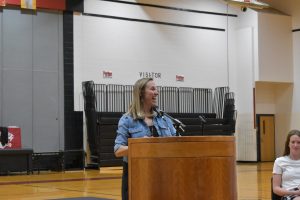 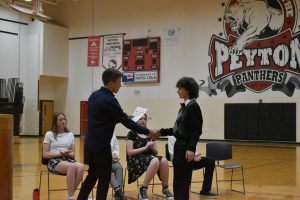 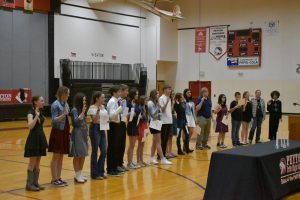 Helping out at Fall Carnival and Trick or Treat Street

Helping out at the Care and Share Food Bank

The Peyton Junior High Student Council consists of a President, Vice President, Secretary, and Class Representatives. Elections are held each year. The students learn about leadership and make decisions related to the Junior High for the Spirit weeks. To raise funds, they sponsor hat days and teachers’ jeans week, as well as sell candy grams. The money raised funds two Junior High dances and purchases NWEA end-of-year testing incentives for the Junior High. They also donate money as needed for Peyton families in need.

The purpose of the Peyton High School Student Council (StuCo) is to act as a liaison between the student body and the administration and other student bodies within the Black Forest League and to increase school pride by connecting all students. StuCO does this by sponsoring Homecoming, Spirit Weeks, and the Drive Smart Campaign. Elections are held in May to elect officers for the following school year. Class representatives are selected at class meetings at the beginning of the school year.

Duties of Officers and Class Representatives

President: The StuCo President is responsible for running the meetings.  The president’s job is to propose new ideas to the other StuCo officers and sponsor and to present approved ideas to the school principal.  During event planning, the president comes up with ideas, recruits people to help, and makes sure the student body is involved.

Secretary:  The StuCo Secretary assists in the planning of StuCo events and is the main connection between the StuCo officers and vendors and other contacts needed for the success of StuCo events.

Treasurer:  The StuCo Treasurer is responsible for the financial health of StuCo.  This includes budgeting for all StuCo events and involves assisting with the planning of StuCo events.

Students who wish to be involved in Student Council need to make a year-round commitment, be able to talk to people, and have school spirit.  Officers must have a cumulative GPA of at least 3.0 and class representatives must have a 3.5 cumulative GPA.  If you are eligible and interested in being a Student Council officer, listen to the announcements in April/May to see when the elections are coming up and then talk to the Student Council Sponsor.  You will need to prepare a speech and present it to the entire student body at an assembly in May.

THINKING OF ENROLLING IN OUR DISTRICT?

Thank You To Our Sponsors